Welcome to the Slackware Documentation Project

This document answers questions frequently asked about Slackware Linux. If you have any specific topic in mind for the FAQ, create a heading for the FAQ entry, under an appropriate section, and provide your answer. If you cannot answer it, then somebody else might have the answer. Either way, the FAQ is a great way to build up tidbits of knowledge that might otherwise not fit into an entire article.

If the answer is too long to fit comfortably into two or three paragraphs, consider adding a link in the answer to an existing page that answers the question or create a new page if one doesn't exist on the topic and the question is important enough to justify a page.

What is Slackware Linux?

How can I get a copy of Slackware Linux?

Slackware Linux can be obtained for free by downloading the disc images directly from the internet(FTP), Internet mirrors and via BitTorrents .

Can I buy copies of Slackware Linux?

Can I buy Slackware gear?

You bet, just go to the Slackware Store.

Why spend money if I can download Slackware Linux for free?

Indeed, Slackware Linux will forever be freely available for download, no strings attached. However, consider:
Slackware Linux is developed by Patrick Volkerding as a full-time job. The sale of Slackware Linux CD's, DVD's and paraphernalia is his only source of income. The core team of developers working with Patrick do not get paid, but should Patrick have to stop developing Slackware because he can no longer support himself enough to do so, the distribution will then have a very uncertain future.

Who are the people behind Slackware Linux?

LinuxQuestions.org did an interview with Patrick Volkerding recently. That interview covers a lot of ground, including mentions of past and present contributors, their involvement, and a brief history of Slackware Linux.

What is this talk about stable and current versions?

Stable versions are the numbered releases (12, 12.1, 13, 13.37 etc.). They are supported for a number of years after release, by way of security updates. Security updates are added to the the “/patches/packages/” subdirectory of a Slackware release tree on every public mirror. Functional updates are not added to past releases.

The “current” branch on the other hand, is a development tree which is always split-off from a recently released stable Slackware directory tree. Usually this split-off happens some weeks after the stable release.
It marks the start of a new development cycle towards the next stable release. At the end of a development cycle, a Slackware release is created by renaming the top-level “slackware-current” directory to “slackware-NEWVERSION”. Slackware-current is known to cause relatively frequent and potentially disruptive updates to the system. New users and users looking for a stable system for production use should always use a (fairly recent) stable release. The Slackware developers assume that anyone running slackware-current realizes that he/she is in essence, a beta tester.

If you want to know when the next version will be released (at time of writing the most recent stable release is 13.37), it will be ready… when it's ready! There are no fixed release dates, as the Slackware goal is to deliver the most stable Linux experience.

How can I verify my copy of Slackware Linux?

All files in a Slackware Linux distribution can be verified against the GPG key of the distribution. For instance, if you want to verify if the ISO image you downloaded is an official¸ non-modified ISO image, then you run the following sequence of commands (example ISO for Slackware 13.37 for x86_64 platform):

This message (gpg: Good signature) means that the ISO file is the same file which was cryptographically signed by Patrick Volkerding.

How do I install Slackware Linux?

How do I upgrade an existing Slackware Linux installation without re-installing?

To track the “Current” branch, read the page on Slackware-Current.

If you wish to perform a major upgrade from an earlier release to the latest stable version, you should read and follow the instructions in UPGRADE.TXT and CHANGES_AND_HINTS.TXT files provided in the official Slackware CD/DVD or internet mirror for the appropriate version (that is, the latest version).

Before upgrading the system, it is recommended that you always make a complete backup of your data.

Where do I get more information on Slackware Linux online?

A bunch of links to valuable online sources of Slackware information can be found on this page. The officially recognized web forum for the Slackware community is at LinuxQuestions.org forums.

Where can I find commercial support for Slackware Linux?

The official Slackware website lists some companies which offer Slackware Linux technical support and consulting. It is probably better to make local inquiries in your city or town for Linux related tech services if you need hands-on support. The local LUG (Linux User Group) might also prove to be a valuable source of advice/information.

Does Slackware Linux have a special "desktop" edition, "server" edition and...

No, there is only one edition of Slackware. Slackware is a general purpose distribution that can be configured and customized to the end user's needs. See also the Slackware philosophy for a lengthier explanation for adhering to the KISS philosophy.

When will Slackware Linux "x.y" version be released?

Slackware Linux does not have a fixed release schedule. The principle behind this is to release when ready and not before. There are no six-month release cycles like a few other popular Linux distributions. See the philosophy page for more information.

Does Slackware Linux work with my hardware or peripheral?

In short, if the Linux kernel supports a piece of hardware, so does Slackware. The distribution's “huge” kernel is compiled with maximum support for most devices and is a pristine, unpatched kernel. So if any Linux distribution is likely to have support for a given hardware device, Slackware should.
Be aware that, even if a device is supported by a kernel driver, end user applications and userspace tools to utilize the full functionality of the hardware may be lacking. This is a rather complex topic and may require persistence and patience to research and figure out, especially in the case of low-cost or obscure devices.

Use an Internet search engine such as Google or DuckDuckGo, or use a community contributed hardware compatibility list like the LinuxQuestions HCL to find out if your piece of hardware works on Linux or not.
While this can be a considerably daunting task for new Linux users, here are some references to get started:

How do I install/upgrade/remove software in Slackware Linux?

Slackware Linux comes with its own package management tools, namely pkgtool, installpkg, upgradepkg and removepkg for installing, upgrading and removing software packages. makepkg can be used to create packages. See also slackpkg and the page on installing software.

Why doesn't Slackware Linux have my favourite "XYZ" software included in the CD/DVD?

The official distribution is small enough for various reasons, the most important one being constraints on developers' time and resources. The short answer is that the official Slackware distribution cannot carry every possible open source application that might be needed by its users. However, Slackware still provides a large number of applications that are needed by most users.

Other sources for obtaining software not found in the Slackware CD/DVD (both in source and binary form):

Note that the licensing of some software may only permit redistribution in source form. Please do not redistribute or make available online any binary packages of software you compile from source unless you are sure the license permits it. Also avoid packaging and redistributing proprietary software without the creator's permission.

This is a huge debate in the Open Source community, bordering on vi vs emacs like flame wars, in reference to package management and dependency handling; but for several reasons, summarized shortly below, Slackware does not prefer “automagic” dependency resolution:

Distro X and Y does package management with dependency handling and...

Yes, many distributions have package managers that do dependency handling and do them well. Indeed, there are many choices in that regard. The Linux community still needs a stable, tried and tested distribution that doesn't. Slackware certainly fills a niche in the Linux community in that regard. But as always, preferences vary and many Linux users do prefer the bare simplicity of Slackware. One thing to bear in mind is that the core simplicity of the package management in Slackware has one significant side benefit: there will always be third-party enhancements and solutions to commonly faced issues.

Why does Slackware take so long to boot up?

By default, Slackware installs the huge kernel, which has built-in support for all possible hardware drivers. This may increase you boot time as the kernel probes for hardware at startup. You can switch to the generic kernel by following the instructions in the file /boot/README.initrd. See also: how to set up the generic kernel.

You may also want to disable unused services in /etc/rc.d/ directory by disabling the executable bit of the startup script. For instance, to disable the Apache daemon, simply run (as root)

then navigate to services item, mark it with Space key and press Enter 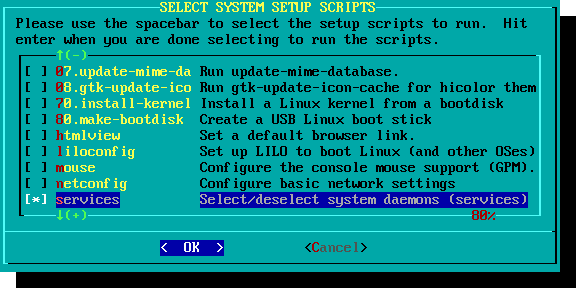 then clear mark in front of [ ] httpd item with Space key and press Enter. 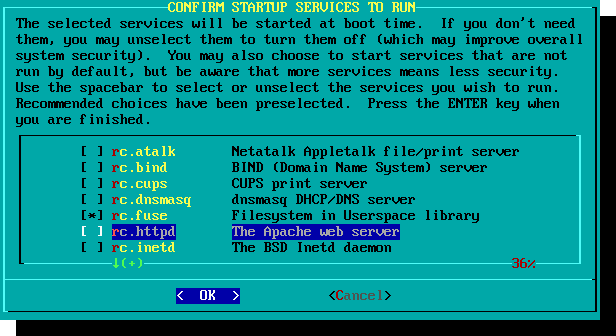 Additionally, if you use LILO, Slackware's default boot loader, you can add the compact option to /etc/lilo.conf to speed up the boot process by merging read requests from adjacent sectors:

Also, Slackware runs a bunch of X/GTK related scripts at startup for multiuser runlevels (fc-cache, update-mime-database, gtk-update-icon-cache, update-gtk-immodules, update-gdk-pixbuf-loaders , update-pango-querymodules etc.). These may be disabled manually by commenting out those lines which refer to them in the file /etc/rc.M but don't disable anything unless you're absolutely sure you know what you are doing! These scripts are essential for GTK applications to render fonts and icons properly.

Unless you are a fairly advanced user and know what you are doing, do not attempt to modify or disable any of the boot scripts. Does a few extra seconds gained while booting really make a big difference?

Slackware Linux has a reputation for being tough for newbies. Is this true?

Read The Slackware way to find out what you can expect from a distribution like Slackware. While Slackware certainly is different from many other distributions, whether easy or difficult to use is a matter to be decided entirely by the individual user.

Some things to bear in mind, though: